Home > Library > Another kind of witness 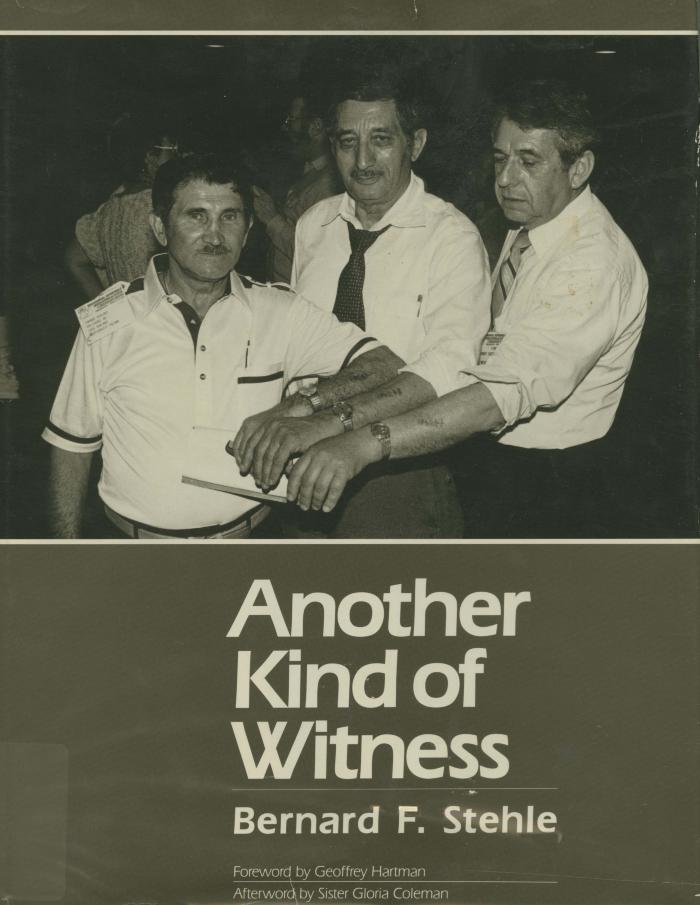 Another kind of witness

Find or request this item
Another kind of witness
Call No: 973.927 S81a
Available
Call Number973.927 S81a
Dates1988; ©1988
Statement of ResponsibilityBernard F. Stehle ; foreword by Geoffrey Hartman ; afterword by Gloria Coleman.·
Creators & ContributorsStehle, Bernard F. (author)
Hartman, Geoffrey H. (contributor)
Coleman, Gloria (contributor)
SummaryAn American photographer and Christian of German descent, Bernard Stehle is a most unusual witness to the most extraordinary phenomenon of the twentieth century: the Holocaust. Yet Stehle, now 46, was a toddler riding a tricycle in his safe Philadelphia neighborhood while Jewish children in Europe were being murdered in the ghettos and death camps of Hitler's Third Reich.

"I have found it very hard to deal with that irony of fate," he explains. "Although I am not Jewish, I consider myself a child of the Holocaust period, and so I consider myself another kind of witness along with those who suffered through and survived...."

When more than 2,000 American Jewish survivors of the Holocaust—along with their children and grandchildren—gathered in Philadelphia in April 1985 to commmorate the fortieth anniversary of their liberation, Bernard Stehle was there to document what he saw: the searching, the reunions, the pain of remembering, the quiet wonder of being alive. Badges and banners in his photographs proclaim the survivor's commitment—never to forget—while in the faces of his subjects we read layers of meaning and experience.

The photographs of seemingly ordinary people are accompanied by the extraordinary stories that the survivors told the photographer"stories of brutality and kindness, abandonment and rescue, fear and courage, death and survival. Stehle presents their experiences in the form of a letter to his own son and daughter, emphasizing the inescapable legacy of the Holocaust, mingled with a hopeful message of shared responsibility for all humankind.

"As ou continue to grow and find your own ways of bearing witness," Stehle tells his children, "be encouraged by the example of these survivors who lives now touch yours." No one who experiences this book will be unmoved by the challenge. —Book jacket
Physical Description xiii, 153 pages : illustrations ; 31 cm
Carrier Typevolume
LanguageEnglish
PublisherPhiladelphia : Jewish Publication Society
EditionFirst edition
RecognitionGifted by Ronnie Tessler
Permalinkhttps://collections.vhec.org/Detail/objects/6437