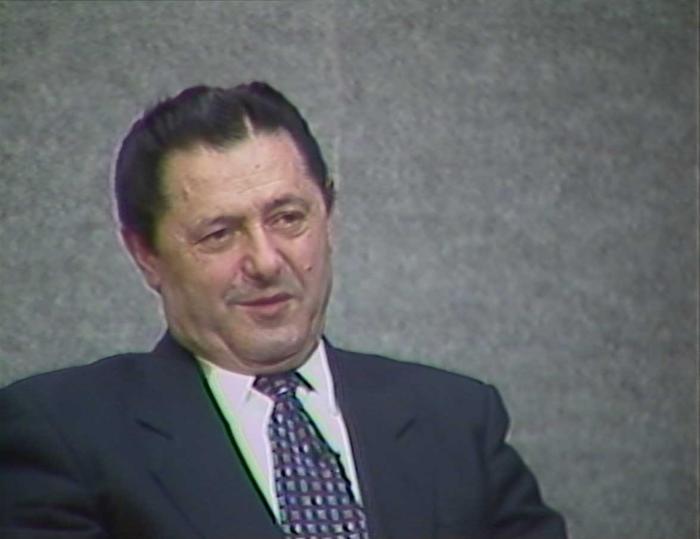 Larry F. was born in Cluj, Romania in 1931. He was the youngest of four children. He describes his family and their religious practices. He recalls the Hungarian occupation of the region, which resulted in increased restrictions against Jews. Larry remembers his father's draft into slave labour battalion and never seeing him again. He recalls the German invasion in 1944 and more restrictions against Jews. He describes being moved into a brick factory outside Cluj which served as the ghetto. He recalls receiving help from a non-Jewish neighbour. Larry describes his deportation to Auschwitz where he was able to stay together with his remaining brother in Auschwitz-Birkenau after taking the advice of an older prisoner. He recalls hearing about the crematoria. He describes their transfer to Kaufering labour camp and working in munitions factories. Larry describes the frequent beatings and deplorable living conditions. He recalls surviving a bought of typhus with the help of his brother. Larry describes surviving the bombing of the train transferring them to Dachau near the end of the war. He describes liberation by United States troops. He recalls his overwhelming emotional response to his personal loss of family and the greater loss of the Jewish people. Larry remembers his time living in Feldafing and Foehrenwald displaced persons camps and considering moving to Israel on an illegal transport. Larry explains how he was able to emigrate to Canada with assistance from the Canadian Jewish Congress’ War Orphan Project. He recalls experiencing antisemitism in Canada and deciding to change his name as his brother had done. Larry discusses discovering his sister was still alive and living in Budapest. He describes his family and life in Canada. Larry discusses the history of Jewish persecution in Europe and how he believes the Catholic Church encouraged antisemitism.

RightsThe University of British Columbia | Holocaust Documentation Project | Consent to Record and Retain Records on file
NoteThe date of the interview stated by the interviewer is different from the date on the title card of the first tape. Tape was recorded simultaneously on video and audio cassette.
Other Holding InstitutionsFortunoff Video Archive for Holocaust Testimonies (repository)
Funding NoteCataloguing and digitization of this testimony was supported by funding from the Government of Canada.
Permalinkhttps://collections.vhec.org/Detail/objects/663