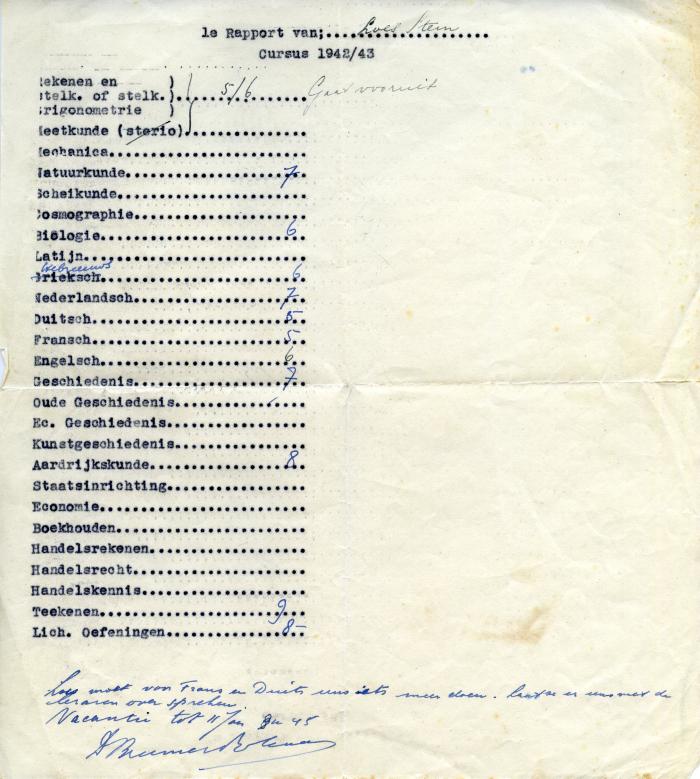 Louise Stein Sorensen graduated from the University of Amsterdam with a degree in Social Psychology in 1956. She married Eigil (Ike) Kaergaard Sorensen in her home town in January 1959. Shortly thereafter, she moved to British Columbia with her husband, a Danish immigrant who already resided there. They had two sons and three grandsons. Sorensen has been an outreach speaker for the Vancouver Holocaust Education Centre since 1985 and was a VHEC board member for ten years. Additionally, she was a member of the Gesher Project, a group of survivors and children of survivors who met regularly to create painting, writing and discussion about the Holocaust. Sorensen is a founding member of the VHEC’s child survivor group and a member of the board of the World Federation of Child Survivors of the Holocaust.
Extent & Medium1 report : original ; 23.9 x 21.5 cm
Scope & ContentItem is a report card of Sorensen’s from the 1942/1943 school year.
Caption, signatures and inscriptionsThe item contains type in black ink and hand inscriptions in blue and black ink on off-white paper. Loes Stein is handwritten in black ink on a typewritten dotted line. Included in the typescript are 26 classes, 12 of which Sorensen received marks. The marks are handwritten in blue ink, except for the first class on the list, which is in black ink. Next to this first mark are two Dutch words, also handwritten in black ink. At the bottom of the report are three sentences and a signature handwritten in blue ink. The paper contains a watermark that reads G.W./ Papier/167. The words, along with several decorative lines, are positioned inside an upside-down triangle.
LanguageDutch
Physical Characteristics and Technical RequirementsThe item shows signs of aging and handling. The paper has two deep creases along both the horizontal and vertical planes of the paper. Additional folds and creases occur across the item. There is a 2-cm tear originating on the right side of the middle horizontal crease. The paper’s edges show discoloration, specifically in the top right quadrant and entire bottom (recto). There is a sizable stain originating in the verso’s bottom left quadrant; this can also be seen on the recto. Smaller, subtler stains, or mold, are found on the paper.
Part ofPersonal records
Permalinkhttps://collections.vhec.org/Detail/objects/7683