Home > Archives > [Drawing of mother sitting while home is raided] 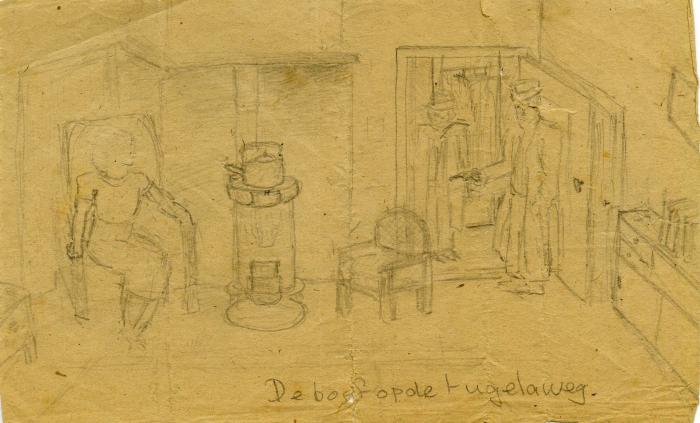 [Drawing of mother sitting while home is raided]

Louise Stein Sorensen graduated from the University of Amsterdam with a degree in Social Psychology in 1956. She married Eigil (Ike) Kaergaard Sorensen in her home town in January 1959. Shortly thereafter, she moved to British Columbia with her husband, a Danish immigrant who already resided there. They had two sons and three grandsons. Sorensen has been an outreach speaker for the Vancouver Holocaust Education Centre since 1985 and was a VHEC board member for ten years. Additionally, she was a member of the Gesher Project, a group of survivors and children of survivors who met regularly to create painting, writing and discussion about the Holocaust. Sorensen is a founding member of the VHEC’s child survivor group and a member of the board of the World Federation of Child Survivors of the Holocaust.
Extent & Medium1 drawing : pencil on paper ; 12.5 x 20.5 cm
Scope & ContentItem is a freehand drawing depicting the moment the “bad men” raided Sorensen’s home. Sorensen’s mother can be seen sitting in a corner of the room. At the bottom of the drawing De boef op de tugelaweg is handwritten in Dutch. This translates to “Bandit at the Tugelaweg.” According to Sorensen, the scene depicted in the drawing occurred at their residence in the ghetto.
LanguageDutch
Part ofPersonal records
NotePhysical description note: Transmitted light reveals laid and chain lines, which suggests that the paper is handmade.
Physical condition note: The item is extremely fragile. The drawing displays considerable signs of aging, handling, and storage. Five vertical folds occur in the drawing’s left and right quadrants, as well as along the middle. Several small tears and folds appear along all of the edges of the paper. The drawing has two significant tears: one at the bottom of the vertical center fold and one beginning to the right of the right vertical fold, tearing to the right, and ending 3.5 cm from the top of the drawing. Small stains or signs of mold appear on both the recto and verso of the drawing. Aging can be seen in the subtle fading of the pencil.
Permalinkhttps://collections.vhec.org/Detail/objects/7686