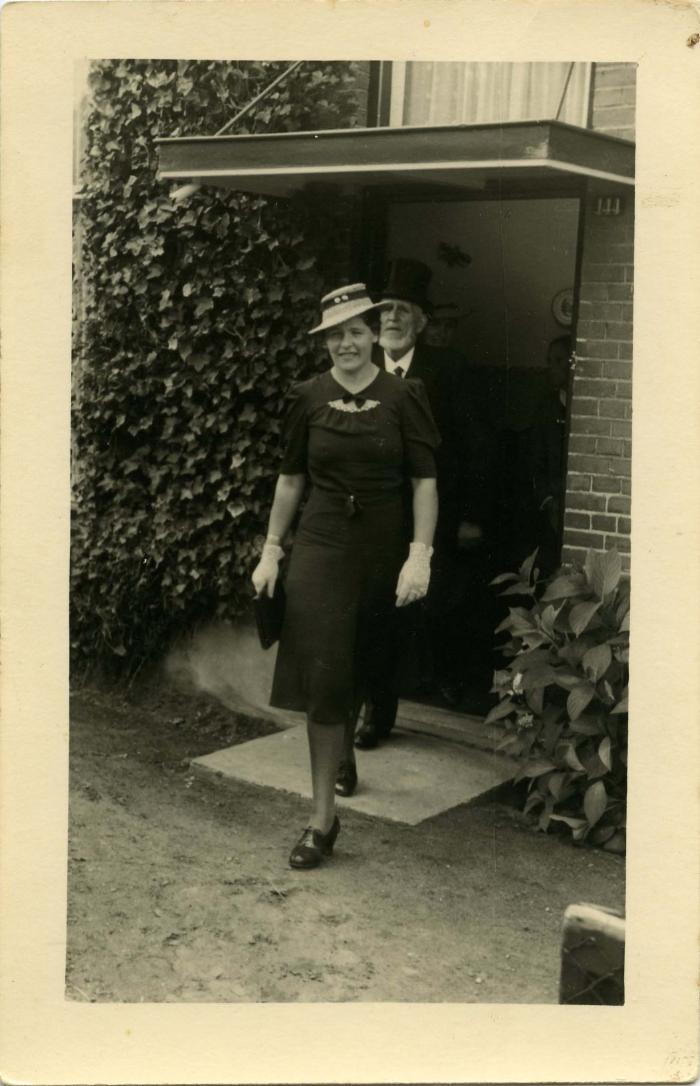 Louise Stein Sorensen graduated from the University of Amsterdam with a degree in Social Psychology in 1956. She married Eigil (Ike) Kaergaard Sorensen in her home town in January 1959. Shortly thereafter, she moved to British Columbia with her husband, a Danish immigrant who already resided there. They had two sons and three grandsons. Sorensen has been an outreach speaker for the Vancouver Holocaust Education Centre since 1985 and was a VHEC board member for ten years. Additionally, she was a member of the Gesher Project, a group of survivors and children of survivors who met regularly to create painting, writing and discussion about the Holocaust. Sorensen is a founding member of the VHEC’s child survivor group and a member of the board of the World Federation of Child Survivors of the Holocaust.
Extent & Medium1 photograph : original ; b&w ; 13.9 x 9 cm
Scope & ContentItem is a photo of Johan Potman and his wife leaving the front door of their home in Abbenes, Netherlands. This is the house in which Sorensen hid. Sorensen was given this photograph around 2009 by the Potmans' daughter.
Caption, signatures and inscriptions“Fotokoning/Lisse” is stamped in red ink at the top center of the verso. Above the stamp is the number “5” handwritten and underlined in pencil.
LanguageDutch
Physical Characteristics and Technical RequirementsThe faint remnants of dried, clear adhesive can be found in a circular shape in the center of the verso. The item shows slight signs of aging in the yellowing of the photo.
Part ofPhotographs
Permalinkhttps://collections.vhec.org/Detail/objects/7727