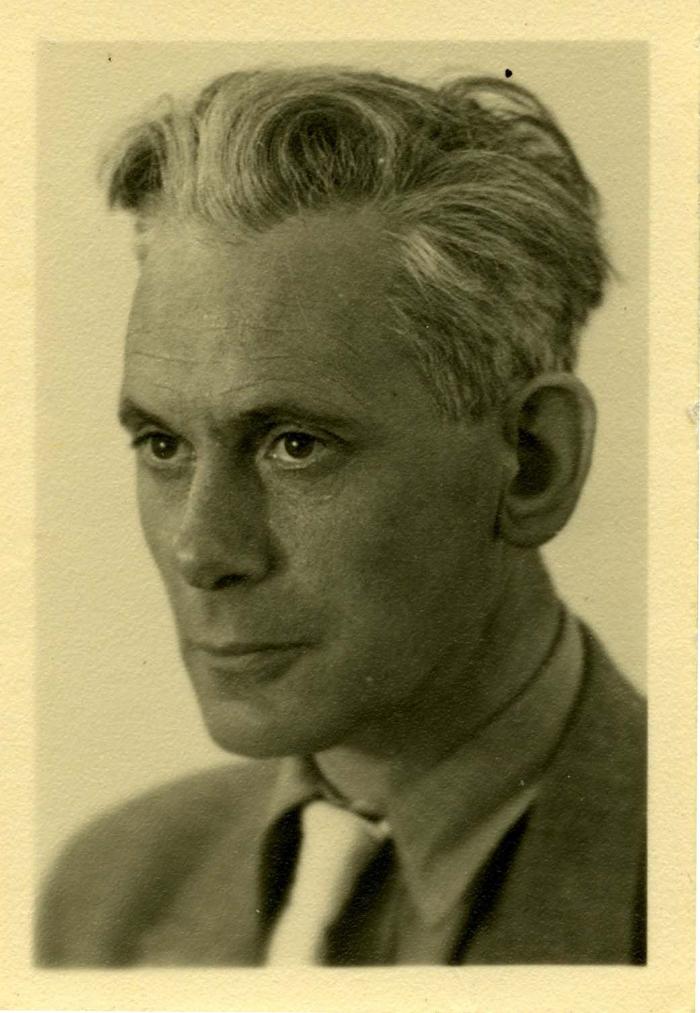 Louise Stein Sorensen graduated from the University of Amsterdam with a degree in Social Psychology in 1956. She married Eigil (Ike) Kaergaard Sorensen in her home town in January 1959. Shortly thereafter, she moved to British Columbia with her husband, a Danish immigrant who already resided there. They had two sons and three grandsons. Sorensen has been an outreach speaker for the Vancouver Holocaust Education Centre since 1985 and was a VHEC board member for ten years. Additionally, she was a member of the Gesher Project, a group of survivors and children of survivors who met regularly to create painting, writing and discussion about the Holocaust. Sorensen is a founding member of the VHEC’s child survivor group and a member of the board of the World Federation of Child Survivors of the Holocaust.
Extent & Medium1 photograph : original ; b&w ; 6.5 x 4.5 cm
Scope & ContentScope and content: Item is a photo of Arie Pleysier, the husband of Sorensen’s mother’s cousin, Rosette née van Dam. They lived in Hilversum, Netherlands. Arie was the individual who smuggled Sorensen and her family out of Amsterdam in 1943. Furthermore, he helped them find a hiding address, as well as forged papers and concealed Sorensen’s father’s assets utilized for paying people hiding them. He was not Jewish; his wife was half Jewish (father). This photo was given to Sorensen by Rosette’s daughter; she still lives in Holland.
Physical Characteristics and Technical RequirementsThe item shows slight signs of aging in the yellowing of the photo.
Part ofPhotographs
Permalinkhttps://collections.vhec.org/Detail/objects/7729