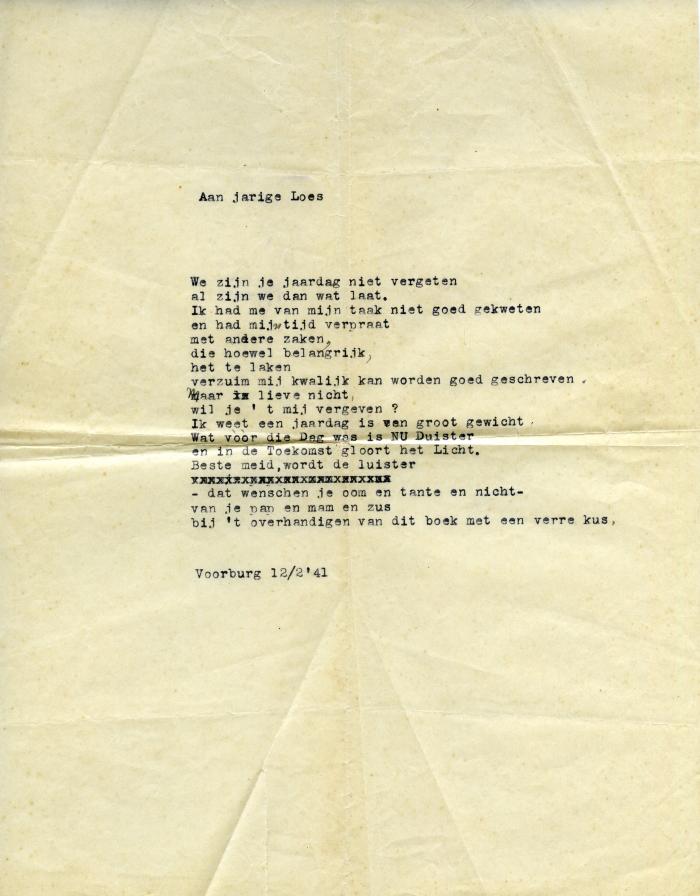 Title NoteThe supplied title proper is based on the opening line of the letter.
Date of Creation12 Feb. 1941
Identifier2019.047.045
CreatorStein Sorensen, Louise
Location in CollectionLouise Stein Sorensen fonds > Correspondence
Administrative/Biographical HistoryLouise Stein Sorensen was born in Rotterdam on February 12, 1929 to Isidor Stein and Marianne (Jeanne) van Dam. Her sister, Eleonore, was born in 1923. Sorensen’s immediate family moved from Rotterdam to Amsterdam in 1936.

Louise Stein Sorensen graduated from the University of Amsterdam with a degree in Social Psychology in 1956. She married Eigil (Ike) Kaergaard Sorensen in her home town in January 1959. Shortly thereafter, she moved to British Columbia with her husband, a Danish immigrant who already resided there. They had two sons and three grandsons. Sorensen has been an outreach speaker for the Vancouver Holocaust Education Centre since 1985 and was a VHEC board member for ten years. Additionally, she was a member of the Gesher Project, a group of survivors and children of survivors who met regularly to create painting, writing and discussion about the Holocaust. Sorensen is a founding member of the VHEC’s child survivor group and a member of the board of the World Federation of Child Survivors of the Holocaust.
Extent & Medium1 letter : original ; 27.9 x 21.4 cm
Scope & ContentItem is a letter. The letter begins with the phrase Aan jarige Loes, which translates to “To Loes, the birthday girl.” The letter closes with Voorburg 12/2 ’41. The letter was typewritten on a typewriter in black ink on thin, off-white, translucent paper.
LanguageDutch
Physical Characteristics and Technical RequirementsIt is very fragile and contains many folds and creases. A small hole is forming at the center of the paper; this is due to two, deep creases that extend vertically and horizontally across the paper. The hole is beginning to obstruct the typewritten word was. Small stains or mold can be seen on both the recto and verso, specifically in the upper and lower left quadrants (recto).
Part ofCorrespondence
Permalinkhttps://collections.vhec.org/Detail/objects/7761