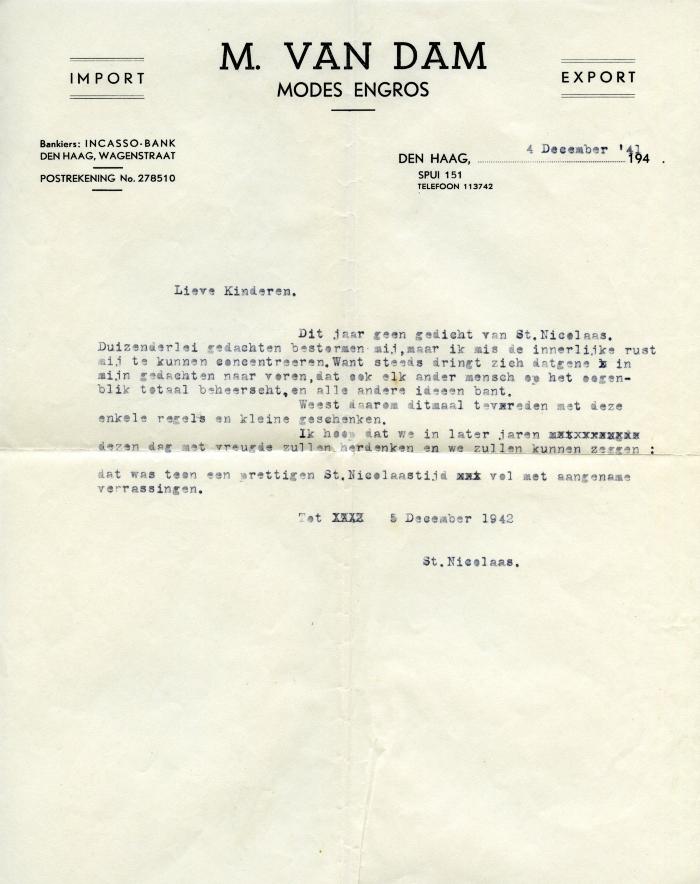 Louise Stein Sorensen graduated from the University of Amsterdam with a degree in Social Psychology in 1956. She married Eigil (Ike) Kaergaard Sorensen in her home town in January 1959. Shortly thereafter, she moved to British Columbia with her husband, a Danish immigrant who already resided there. They had two sons and three grandsons. Sorensen has been an outreach speaker for the Vancouver Holocaust Education Centre since 1985 and was a VHEC board member for ten years. Additionally, she was a member of the Gesher Project, a group of survivors and children of survivors who met regularly to create painting, writing and discussion about the Holocaust. Sorensen is a founding member of the VHEC’s child survivor group and a member of the board of the World Federation of Child Survivors of the Holocaust.
Extent & Medium1 letter : original ; 27.6 x 21.6 cm
Scope & ContentItem is a letter. The letter was sent from Sorensen’s uncle, Maurits (Mozes) van Dam. Sorensen believes this may have been his last letter. An email received from Sorensen on June 6, 2019, which can be found in the “Stories and translations” series, translates the letter as follows: “This year no poem from St. Nicolaas. / Thousands of various thought storm through my head, but I lack the inner peace of mind to be able to concentrate. Because I am constantly overcome by the same thoughts that every person at the moment completely is consumed with and that crowd out all other ideas. / So this time be content with these few sentences and small gifts. I hope that we will in later years can look back with pleasure on this day and that we will say: that was a pleasant St. Nicholaas full of / Enjoyable surprises. / 5 December 1942.”
Caption, signatures and inscriptionsIt reads (left to right) M. VAN DAM/ IMPORT/ MODES ENGROS/ EXPORT/ Bankiers: INCASSO-BANK/ DEN HAAG, WAGENSTRAAT; DEN HAAG, ______ 19__. / POSTREKENING No. 278510; SPUI 151/ TELEFOON 113742. There is a machine printed, back dotted line between HAAG, and 19__, where “4 December” and “’41” are typewritten in black ink. There are two thin lines, machine printed in black in, above and below the words IMPORT and EXPORT. The letter closes, Tet XXX2 5 December 1942/ St. Nicolaas.
LanguageDutch
Physical Characteristics and Technical RequirementsThe letter displays signs of aging and handling. Two deep creases run vertically and horizontally across the paper. Additionally, there is a smaller crease in the lower right quadrant of the recto. There is a tiny stain which originates on the verso and bleeds through to the verso; it is located under the word elk of the verso. These do not affect the readability of the item. Signs of aging are seen in the item’s faded ink and yellowing paper.
Part ofCorrespondence
Permalinkhttps://collections.vhec.org/Detail/objects/7763