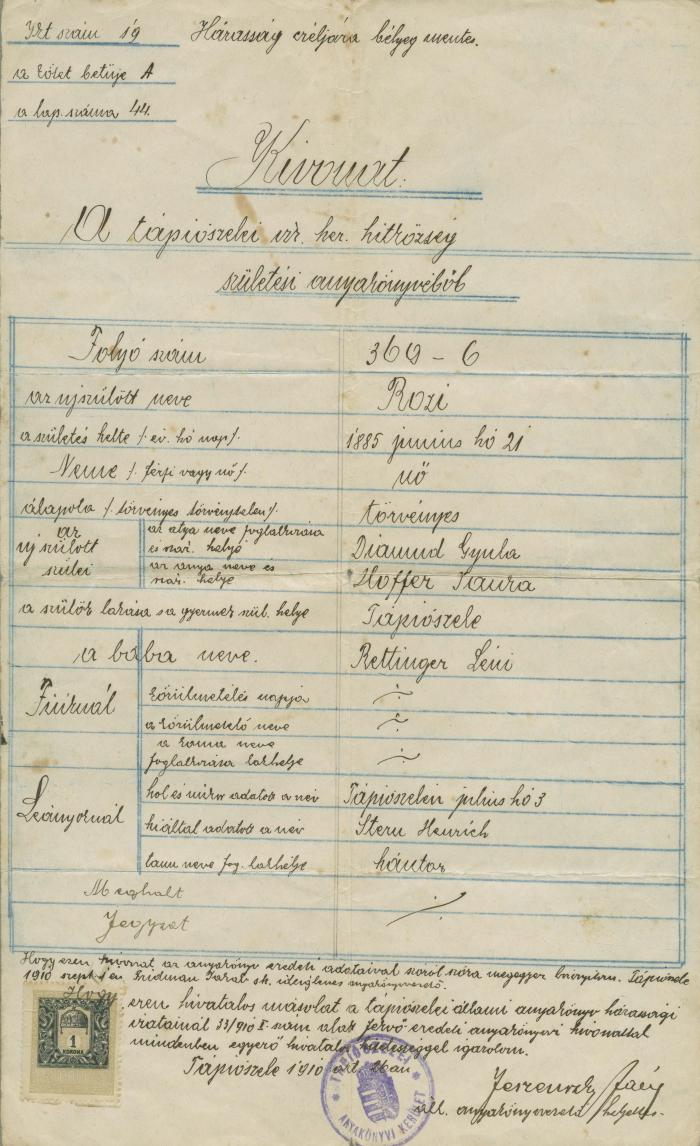 In 1939, Roza Pollák was certified as a morally respectable widow and was entitled to war benefits. After the loss of her husband, Jenő, Roza lived with Sandor Deneberger (b. December 9, 1889, Baja, Hungary, d. 1944, Auschwitz) who had also served in the First World War. Sandor Deneberger worked as a jeweller and watchmaker, ran a jewellery shop and was involved in producing community theatre performances in Tápiószele. According to Ilona Mermelstein, the gold and silver in Deneberger’s shop was confiscated by the Nazis.

Daniel Kiss worked as a mechanic and was forced into labour by the Hungarian government. He worked for the Hungarian air force in 1943. In 1944, he was sent to a labour camp. According to his daughter, Ilona, Daniel worked for a group leader in the camp who eventually let him and eleven other Jewish labourers return home to get a change of clothes before moving to work on aircraft engines produced by the German military in tunnels and bunkers underneath the Dreher Brewery in Budapest. This change of clothes allowed Daniel Kiss to hide after the factory ceased production.

At the time Daniel was forced into labour, Klára worked at the Kiss family mechanical repair shop and Klára’s parents helped to care for Ilona. Ilona’s younger sister was sent to Balotaszállás, a remote village at the southern border of Hungary, to stay with cousins.

Ilona remembers one day going with her mother to see her grandparents, finding the door left open and them gone. The family later heard that communists in town had been rounded up and imprisoned. Eventually the non-Jewish communists were released, but Roza and Sandor never returned.

Roza and Sandor were taken from their home to a police station in Nagykáta (later the closest Jewish ghetto to Tápiószele) by the town’s police chief, Hegedüs Tobiás. From Nagykáta, they were relocated to a prison on Mosonyi Street in Budapest and Roza and Sandor were separated. On May 11, 1944, Roza sent a postcard from Budapest with a message for Klára in hiding. Sandor was deported to a collection camp in Nagykanizsa, from where he mailed a card on May 12, 1944. He was likely deported to Auschwitz later in May, 1944. Roza was sent to the Kistarcsa transit camp, from where she mailed a card to her daughter on June 29, 1944. The Hungarian Regent Miklós Horthy de Nagybánya halted the deportation of Hungarian Jews around this time; Eichmann restarted the deportations on July 14. Roza was among the last of the Hungarian Jews deported to Auschwitz.

During the final months of the war, Klára and Ilona hid with a Jewish doctor, Sandor Stern, in what is now the Blaskovich museum in Tápiószele, with the help of Maria Blaskovich, a family friend.

After the war, the Kiss family was threatened with eviction from their home in Tápiószele. They relied on a relative of Sandor Deneberger, Edit Diamant, also known as Veres Pálne, who testified that Deneberger’s intent was to give the keys to the house to the Kiss family. Later, the family moved to Budapest, where Daniel worked as head engineer for Budapest’s agricultural collectives. Daniel died in 1959; Klára died May 18, circa 1987.

Ilona married her first husband, István Csaplaros (b. August 9, 1934; d. September 19, 1989) on May 18, 1963. They moved from Budapest to Tápiószele in 1965. The couple had one child, Csaba (Avi) Csaplaros, in 1967. István Csaplaros died in 1989. After the death of her husband, on June 30, 1990, Ilona moved to Vancouver, BC to join her sister, who had moved to Vancouver in 1971. Ilona married her second husband, Alex Sandor Mermelstein (b. December 26, 1922, Zádnya; d. February 28, 2006, Vancouver) shortly after arriving in Canada. Ilona Mermelstein lives in Vancouver, BC.
Extent & Medium1 document
Scope & ContentItem is a birth certificate excerpt for Rozi Diamand, born 1885 to Gyula Diamand and Yanka Hoffer in Tápiószele.
LanguageHungarian
Part ofFamily papers
Permalinkhttps://collections.vhec.org/Detail/objects/7801