Home > Library > From Rotterdam to Vught to Vancouver : a Dutch immigrant ... 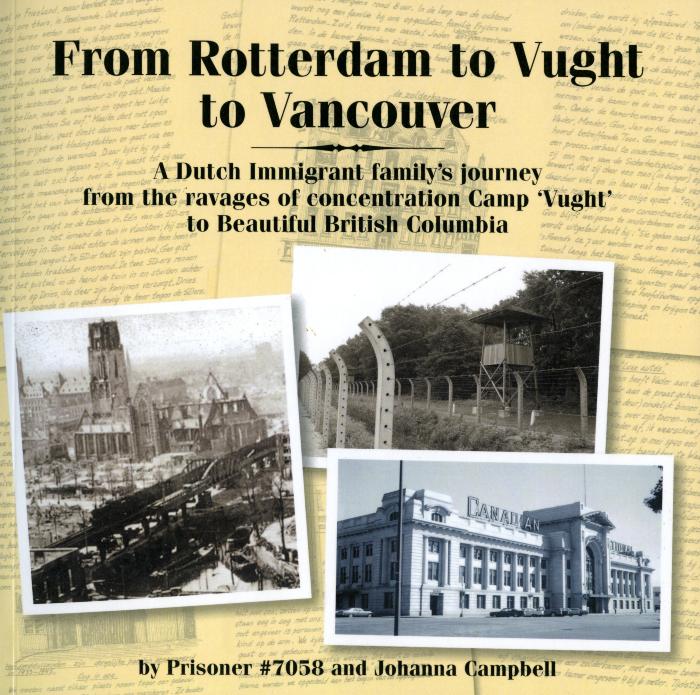 From Rotterdam to Vught to Vancouver : a Dutch immigrant family's journey from the ravages of concentration camp 'Vught' to beautiful British Columbia

Find or request this item
From Rotterdam to Vught to Vancouver : a Dutch immigrant family's journey from the ravages of concentration camp 'Vught' to beautiful British Columbia
Call No: 949.207 C18f
Available
Call Number949.207 C18f
Dates[2018]; ©2018
Statement of Responsibilityby Prisoner #7058 and Johanna Campbell.
Creators & ContributorsCampbell, Johanna (author)
Alderliesten, Nico (author)
Summary"This book is about certain events in WW II, written by the daughter of a Dutch couple who served in the underground, fighting against the Nazi regime in occupied Holland. The author has written the story of her parents whose underground engagement consisted of resisting the German Wehrmacht in every possible way: Too by hiding Jews, handing out illegal ID cards, and sabotaging trains and canal boats to derail and detain the German soldiers; his fiancée Sippie by delivering Trouw and Oranje magazines, helping her family hide an English pilot, and trying to keep Toon safe from his pursuers. Because Toon, a Dutch policeman, did not want to work for the German Wehrmacht, his father, mother and seven brothers and sisters had to go to the concentration camp Vught. Prisoner 7058, one of Toon's younger brothers, wrote about his family's experiences in the camp; his story has been translated by the author and incorporated into this book. Part II of the story traces Toon and his wife Sippie's immigration to beautiful British Columbia in 1951, with four children under five years old. The author, the oldest of the four children, has written her memoirs, her perceptions and experiences of immigrant life, starting as a grade one student in Campbell River and ending with her own love story." —Back cover
ContentsPart I. From Rotterdam to Vught
Part II. From Vught to Vancouver
Physical Description vi, 94 pages : illustrations (some colour), portraits, map, facsimiles ; 21 cm
Carrier Typevolume
LanguageEnglish
PublisherAbbotsford, BC : Jesse Tree Publications
RecognitionGifted in 2019 by Dr. Johanna Campbell in memory of all Dutch Jews who died in German death camps
Permalinkhttps://collections.vhec.org/Detail/objects/7876