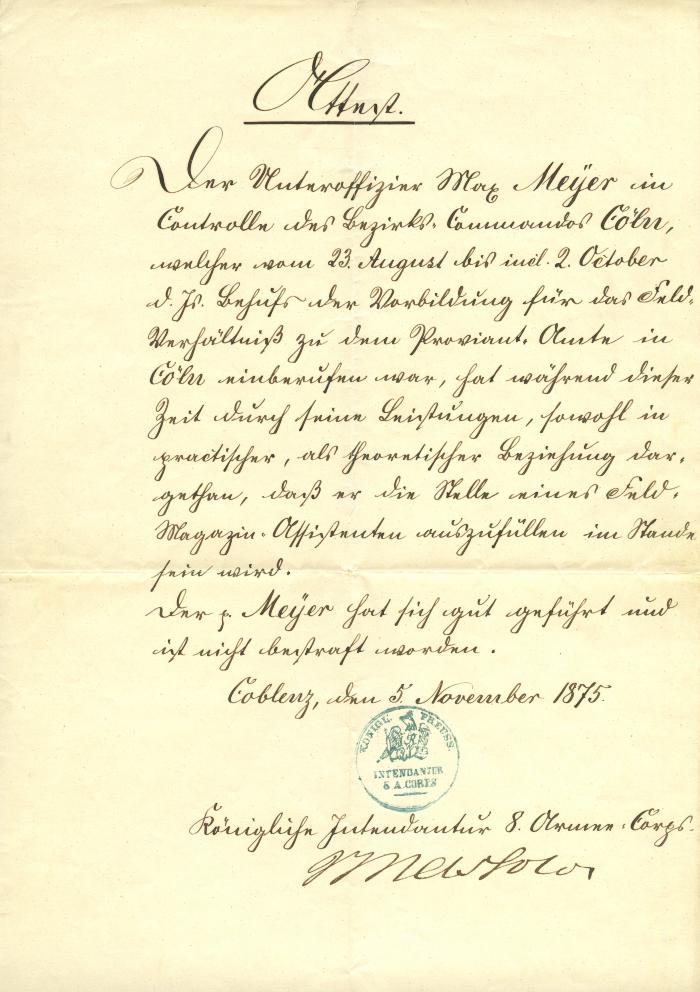 Resource TypeDocuments
Title NoteThe formal title proper is based on the subject of the item.
Date of Creation5 Nov. 1875
GenreCurrency, Medals & Militaria
IdentifierRA038-01-00-00-01
CreatorMeyer family
Location in CollectionMeyer family fonds > Family records series
Administrative/Biographical HistoryPaul Meyer (b. October 9, 1916, d. September 14, 2003) and Max Meyer (b. February 22, 1913, d. April 1, 2004) were born in Cologne, Germany to parents Eugen Meyer (b. August 8, 1880 Cologne, d. October 10, 1964 Vancouver) and Alice née Jonas (b. circa 1890). Eugen Meyer ran a lace and tulle fashion business, M. Meyer & Co., founded by his father, Max Meyer (b. 1848 Bubenheim, Germany, d. 1896 Calais, France) in Cologne, around 1870. Eugen took the business over in the late 1890s, after the death of his father, and ran it with his uncle, Ernest, an accountant. At its height the business employed 300 workers.

They settled in Vancouver, BC, where Paul and Max started a pottery business and their mother, Alice, worked for the Red Cross. In 1954, Paul returned to Cologne and visited the former location of his family’s lace business, on Apostelnstrasse II. The original building was damaged but the basement remained intact. Paul retrieved samples and other materials produced by M. Meyer & Co. in the basement and brought these materials back to Vancouver.
Extent & Medium1 document : 34 x 42 cm folded to 34.1 x 21 cm
Scope & ContentItem is an attestation that Max Meyer received his military training as a subaltern.
Caption, signatures and inscriptionsItem is handwritten in dark brown or black ink on an off-white paper of medium thickness. The topical and chronological date—Coblenz, (?) 5 November 1875—and subscription are found in the eschatocol of the document. A circular stamp containing an eagle and German text in green ink has been marked between the topical and chronological date and subscription of the record.
LanguageGerman
Physical Characteristics and Technical RequirementsThe document has two prominent folds—one vertical and one horizontal—as well as other minor creases. A tiny hole is beginning to form where the horizontal and vertical folds meet. The paper and ink show signs of discolouration and fading. The edges of the recto show subtle signs of darkening. The verso displays surface soiling and discolouration, specifically in the top quadrants.
Archival HistoryPrevious item number assigned by the VHEC: 96.025.007
Part ofFamily records series
Auxiliary Document