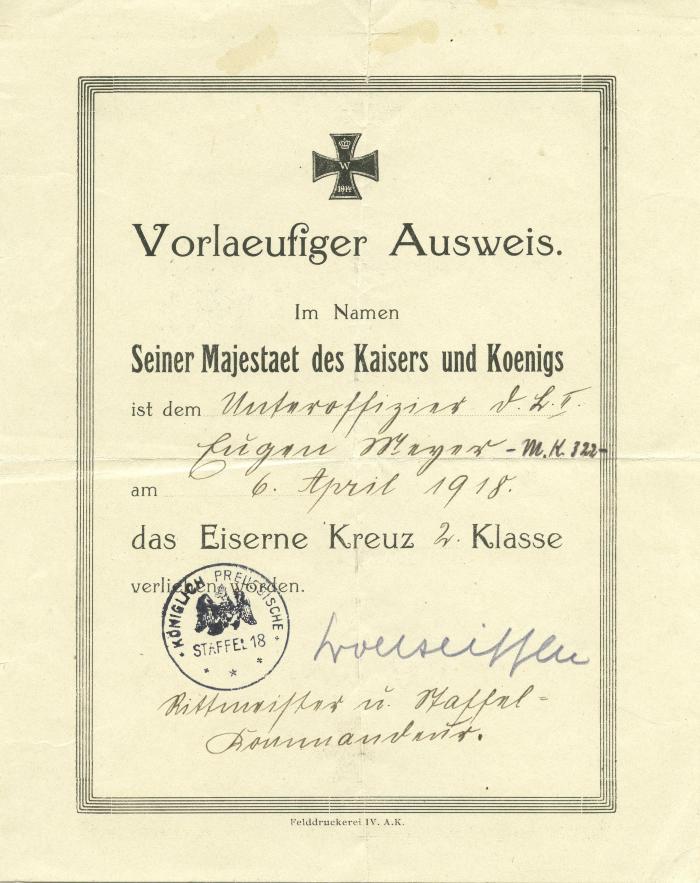 They settled in Vancouver, BC, where Paul and Max started a pottery business and their mother, Alice, worked for the Red Cross. In 1954, Paul returned to Cologne and visited the former location of his family’s lace business, on Apostelnstrasse II. The original building was damaged but the basement remained intact. Paul retrieved samples and other materials produced by M. Meyer & Co. in the basement and brought these materials back to Vancouver.
Extent & Medium1 document : 22 x 17.6 cm
Scope & ContentItem is a citation relating to Eugen Meyer’s awarding of the Iron Cross (class II).
Caption, signatures and inscriptionsThe item is machine printed, handwritten, and stamped in varying shades of black ink and pencil on off-white paper. The intrinsic elements of the record are surrounded by a border composed of six thin lines. Situated above the protocol is a black cross with a white crown, W, and 1914 printed vertically inside. Below the text of the document, a circular stamp with German text and an eagle is stamped in black ink.
LanguageGerman
Physical Characteristics and Technical RequirementsThe document has two prominent folds—one vertical and one horizontal. Additional minor creases are visible. A few stains are present on the recto’s top edge; they are slightly visible on the verso. The paper shows subtle discolouration.
Archival HistoryPrevious item number assigned by the VHEC: 96.025.009
Part ofFamily records series
Auxiliary Document