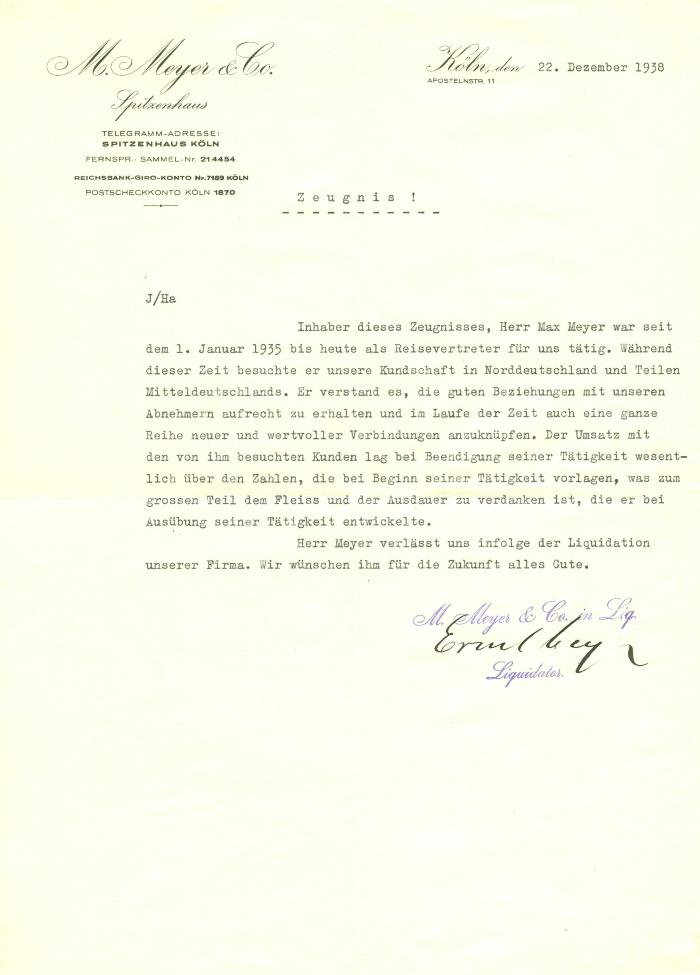 They settled in Vancouver, BC, where Paul and Max started a pottery business and their mother, Alice, worked for the Red Cross. In 1954, Paul returned to Cologne and visited the former location of his family’s lace business, on Apostelnstrasse II. The original building was damaged but the basement remained intact. Paul retrieved samples and other materials produced by M. Meyer & Co. in the basement and brought these materials back to Vancouver.
Extent & Medium1 document : 29.5 x 20.9 cm
Scope & ContentItem is a document certifying that Max Meyer is an employee at his father's business, M. Meyer & Co. Spitzenhaus (certificate of apprenticeship).
Caption, signatures and inscriptionsThe document is machine printed, typewritten, handwritten, and stamped in black and purple ink on white paper. Transferred light reveals a large watermark that runs horizontally along the paper’s bottom. The watermark reads “EKAHA 1856” and is contained within a wavy border. Above the border there is a design of what looks like a closed book with a geometric item resting on top. The protocol of the document contains the entitling and superscription of the document machine printed in black ink. It reads M. Meyer & Co./ Spitenhaus/ Telegramm-adresse :/ Spitzenhouse Köln/ Fernspr.: Sammel-Nr. 214454/ Reichsbank-Giro-Konto Mr. 7189 Köln/ Postscheckkonto Köln 1870. The topical date, machine printed in black ink, and chronological date, typewritten in black ink, are also included in the protocol in the upper right corner of the recto: Köln des 22. Dezember 1938. Below the entitling is the word Zeugnis!, “testimony,” centered and typewritten in black ink. The text of the document is typewritten in black ink. The eschatocol comprises the handwritten attestation of Ernest Meyer, Max’s grandfather, signed between M. Meyer & Co. in Liq. / Liquidator. stamped in purple ink.
LanguageGerman
Physical Characteristics and Technical RequirementsThe document contains two primary folds—one vertical and one horizontal. This may be the result of being stored folded. There is a subtler vertical fold to the right of the primary center fold. Language: The language used is German.
Archival HistoryPrevious item number assigned by the VHEC: 96.015.008
Part ofFamily records series
Permalinkhttps://collections.vhec.org/Detail/objects/7915