Home > Archives > [Letter regarding the receipt of permit from Ottawa] 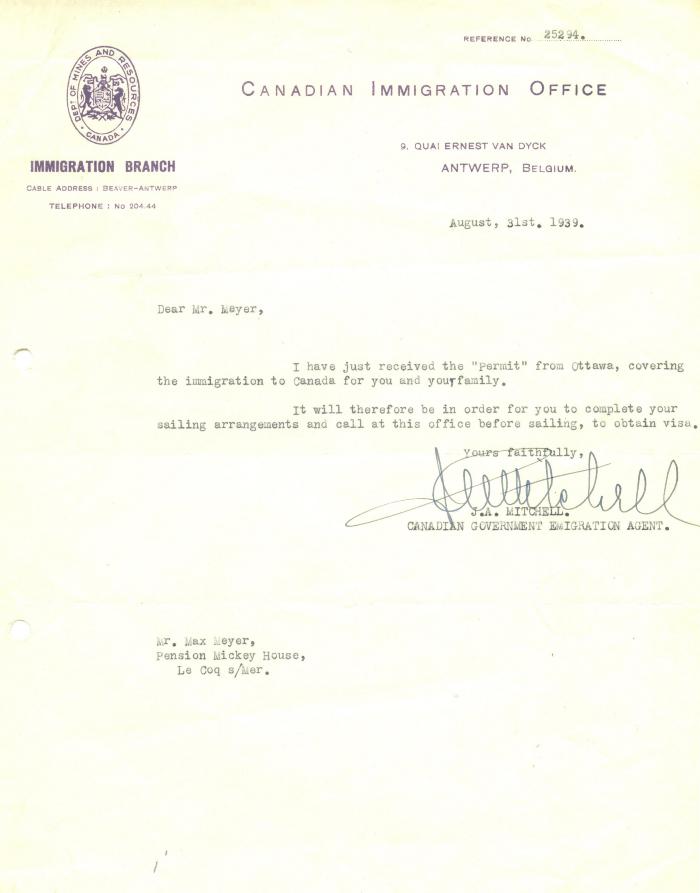 [Letter regarding the receipt of permit from Ottawa]

Resource TypeDocuments
Title NoteSupplied title proper based on contents of the item.
Date of Creation31 Aug. 1939
GenreCorrespondence & Philatelic Materials
IdentifierRA038-02-00-00-04
CreatorMeyer family
Location in CollectionMeyer family fonds > Correspondence series
Administrative/Biographical HistoryPaul Meyer (b. October 9, 1916, d. September 14, 2003) and Max Meyer (b. February 22, 1913, d. April 1, 2004) were born in Cologne, Germany to parents Eugen Meyer (b. August 8, 1880 Cologne, d. October 10, 1964 Vancouver) and Alice née Jonas (b. circa 1890). Eugen Meyer ran a lace and tulle fashion business, M. Meyer & Co., founded by his father, Max Meyer (b. 1848 Bubenheim, Germany, d. 1896 Calais, France) in Cologne, around 1870. Eugen took the business over in the late 1890s, after the death of his father, and ran it with his uncle, Ernest, an accountant. At its height the business employed 300 workers.

They settled in Vancouver, BC, where Paul and Max started a pottery business and their mother, Alice, worked for the Red Cross. In 1954, Paul returned to Cologne and visited the former location of his family’s lace business, on Apostelnstrasse II. The original building was damaged but the basement remained intact. Paul retrieved samples and other materials produced by M. Meyer & Co. in the basement and brought these materials back to Vancouver.
Extent & Medium1 document : 27.5 x 21.8 cm
Scope & ContentItem is a letter from the Canadian Immigration Office in Antwerp to Mr. Max Meyer stating that they have received the permit from Ottawa covering the immigration to Canada for the Meyer family. The emigration agent writes that the permit will be in order for the Meyers to complete their sailing arrangements and to obtain their visas.
Caption, signatures and inscriptionsThe document is machine printed and typewritten in dark purple and black ink on thin, translucent paper. Reflected light reveals a watermark of cursive script across the paper. The Canadian crest of the Department of Mines and Resources is printed in the top left corner of the recto. The author’s subscription in black ink is found beneath the complimentary clause in the eschatocol. Two holes have been intentionally punctured on the verso’s left edge.
LanguageEnglish
Physical Characteristics and Technical RequirementsThe document’s text displays slight signs of fading and discolouration. The recto’s top edge shows minimal discolouration and darkening in the paper, as well as minor creases. Additional creases and folds occur in the paper.
Archival HistoryPrevious item number assigned by the VHEC: 2002.001.005
Part ofCorrespondence series
Permalinkhttps://collections.vhec.org/Detail/objects/7930