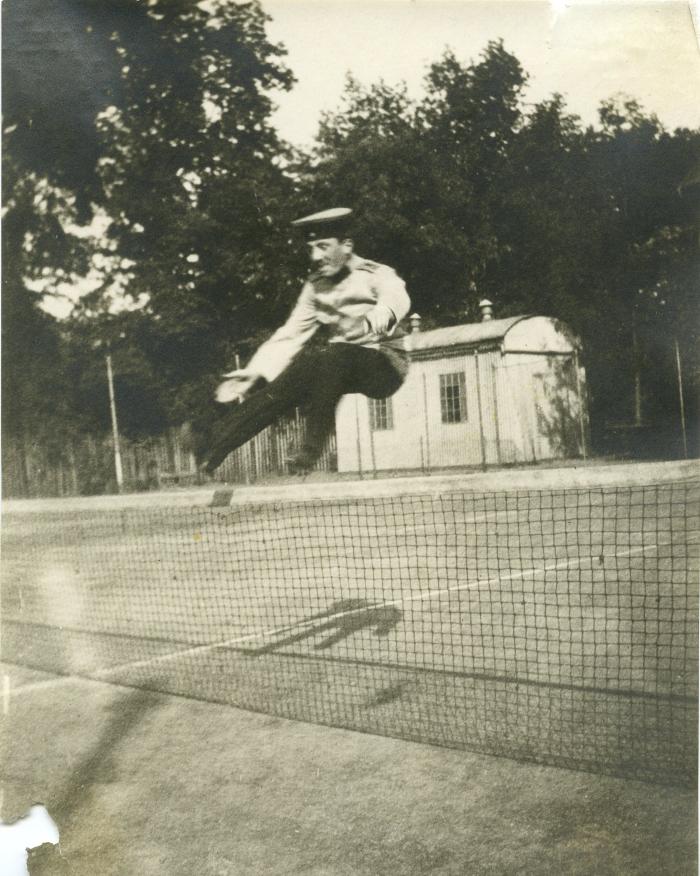 They settled in Vancouver, BC, where Paul and Max started a pottery business and their mother, Alice, worked for the Red Cross. In 1954, Paul returned to Cologne and visited the former location of his family’s lace business, on Apostelnstrasse II. The original building was damaged but the basement remained intact. Paul retrieved samples and other materials produced by M. Meyer & Co. in the basement and brought these materials back to Vancouver.
Extent & Medium1 photograph: b&w ; 11.9 x 8.9 cm
Scope & ContentItem depicts Alfred Meyer while on furlough in Köln, Germany.
Caption, signatures and inscriptionsThe photograph is printed in black and white on a thin paper. The photo has a matte surface.
Physical Characteristics and Technical RequirementsThe item exhibits darkening and discolouration of the image. The edges of the photo are rippled, suggesting exposure to liquid or moisture. There are two tears: one in the upper right corner and one in the lower left corner (recto). The verso’s four corners contain remnants of adhesive. Paper has been peeled away where the four adhesive marks are located, perhaps due to removing from display.
Archival HistoryPrevious item number assigned by the VHEC: 96.025.008f
Part ofPhotographs series
Permalinkhttps://collections.vhec.org/Detail/objects/7960