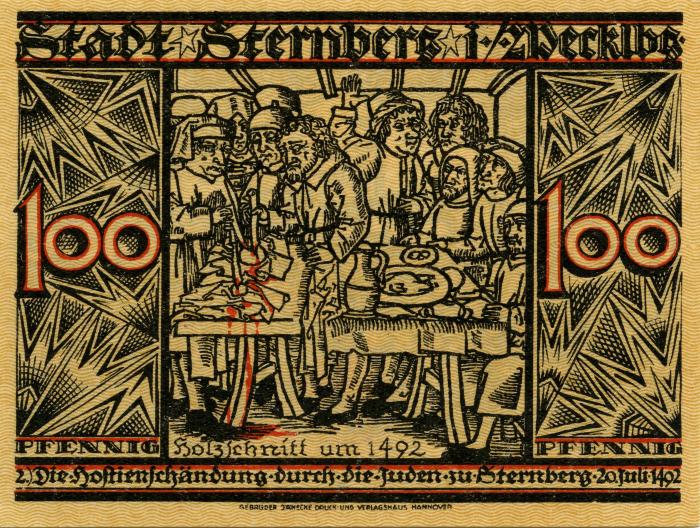 Resource TypeObjects
Date of Creation1922
GenreCurrency, Medals & Militaria
Object ID2019.049.005
Place of CreationSternberg, Germany
DescriptionPaper banknote with black and white antisemitic illustration.
LanguageGerman
ProvenanceGifted to the Vancouver Holocaust Education Centre in 2019 by Peter N. Moogk.
Classificationnotgelden, emergency currency, paper money
Legal Statuspermanent collection
NoteThis banknote is one in a series of three issued to commemorate the killing of Jews accused of desecrating the Eucharist in Sternberg in 1492. This note depicts a group of Jews stabbing a communion wafer and mixing it with blood referencing the blood libel accusation of using the blood of a Christian child to make matzoh.

Emergency currency was issued by individual towns during the period of hyperinflation during the Weimar Republic and would typically include references to local history. The verso states that the note is valid for one month after issue.
Location in CollectionPeter N. Moogk collection > Artefacts series
Permalinkhttps://collections.vhec.org/Detail/objects/8457