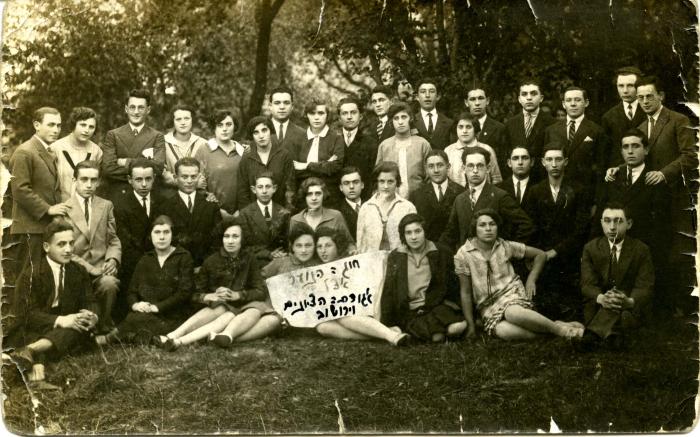 Resource TypeStill Images
Date of Creation[193–?]
GenrePhotographs
Identifier2018.037.012
CreatorGoldman, René
Location in CollectionRené Goldman fonds > Goldman family photographs
Administrative/Biographical HistoryRené Goldman was born on March 25, 1934 in Luxembourg, Luxembourg to Wolf Goldman (b. May 9, 1911 in Wieruszów, Poland, d. January 1945) and Mirel (Mira) Shaindl Goldman (neé Arensztein, b. April 17, 1907 in Kalisz, Poland, d. after September 1942 in Auschwitz, Poland). Wolf and Mirel Goldman lived in Poland until around 1930, then moved to France and Luxembourg, where they were married in October, 1931.

In 1953, René moved to Beijing to study Chinese language, literature and history. He left China in 1958, returned briefly to Poland, then moved to France. In October 1960, he moved the United States to pursue a graduate degree in the Department of History at the Weatherhead East Asian Institute at Columbia University in New York. René Goldman moved to Vancouver in 1963, where he completed his post-graduate studies and taught Chinese history at the University of British Columbia until his retirement.

René Goldman lives in Summerland, British Columbia, Canada, with his wife Terry Dekur. He is associate professor emeritus in the Department of Asian Studies at the University of British Columbia.
Extent & Medium1 photograph : black and white ; 8.5 x 13.5 cm
Scope & ContentItem is a photograph of a large group outdoors. Two women seated in the center hold a white cloth with words in Hebrew reading “Youth chapter of the Zionist association of [Warsaw].” Parts of text may have been handwritten after the photograph was printed, in a dark blue ink. Wolf Goldman is seated far left.
LanguageHebrew
Part ofGoldman family photographs
Permalinkhttps://collections.vhec.org/Detail/objects/8688