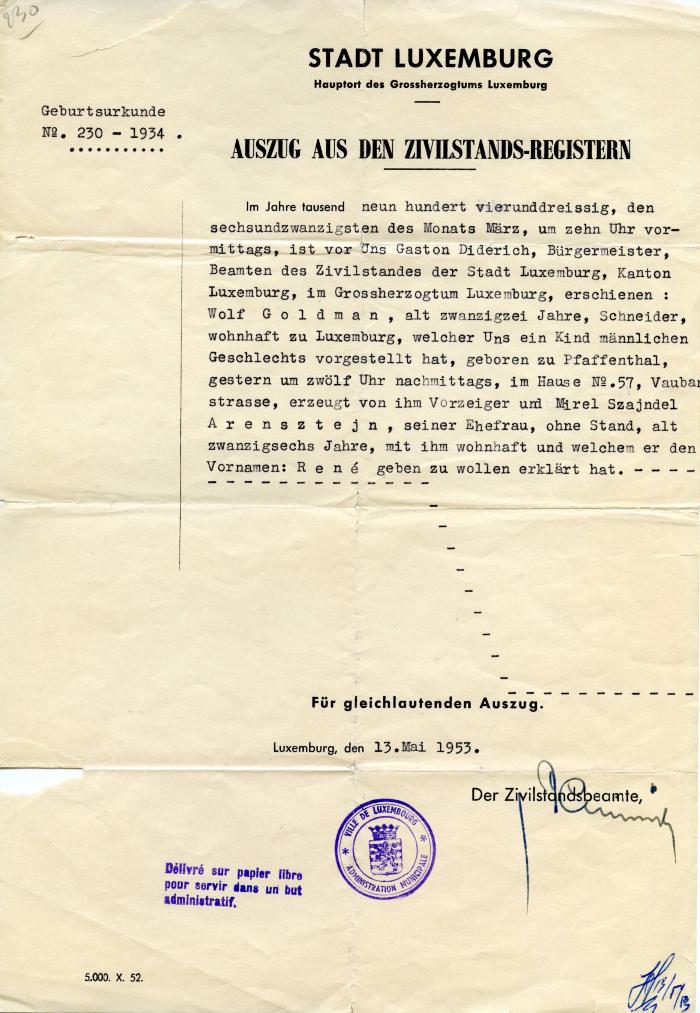 Excerpt from the civil status register

Resource TypeDocuments
Date of CreationMay 13, 1953
GenreIdentity, Migration & Travel
Identifier2018.037.101
CreatorGoldman, René
Location in CollectionRené Goldman fonds > Goldman family records
Administrative/Biographical HistoryRené Goldman was born on March 25, 1934 in Luxembourg, Luxembourg to Wolf Goldman (b. May 9, 1911 in Wieruszów, Poland, d. January 1945) and Mirel (Mira) Shaindl Goldman (neé Arensztein, b. April 17, 1907 in Kalisz, Poland, d. after September 1942 in Auschwitz, Poland). Wolf and Mirel Goldman lived in Poland until around 1930, then moved to France and Luxembourg, where they were married in October, 1931.

In 1953, René moved to Beijing to study Chinese language, literature and history. He left China in 1958, returned briefly to Poland, then moved to France. In October 1960, he moved the United States to pursue a graduate degree in the Department of History at the Weatherhead East Asian Institute at Columbia University in New York. René Goldman moved to Vancouver in 1963, where he completed his post-graduate studies and taught Chinese history at the University of British Columbia until his retirement.