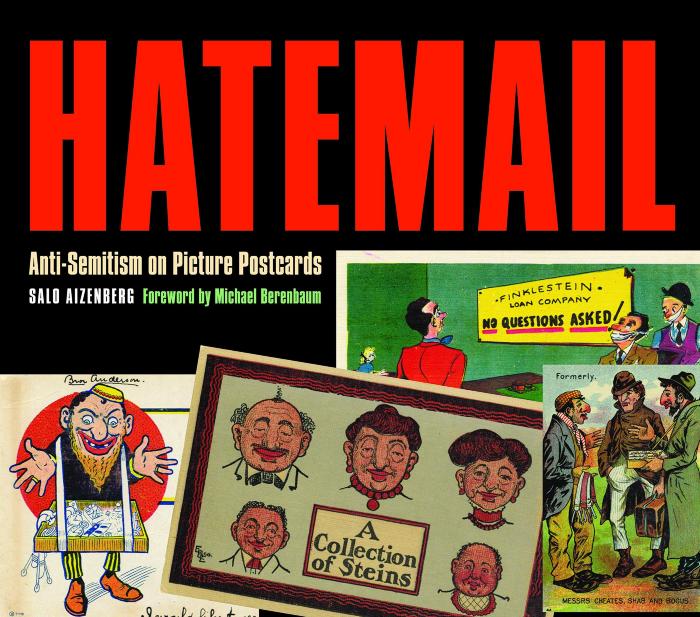 Find or request this item
Hatemail : anti-Semitism on picture postcards
Call No: 305.8924 A31h (in processing)
Due 30 June 2021
Call Number305.8924 A31h (in processing)
Dates[2013]; ©2013
Statement of ResponsibilitySalo Aizenberg ; foreword by Michael Berenbaum.
Creators & ContributorsAizenberg, Salo (author)
Berenbaum, Michael (contributor)
Aizenberg, Salo (subject)
Summary"Today e-mail, Facebook, and Twitter are sometimes used to spread hateful messages and slurs masking as humor. In the late nineteenth and early twentieth centuries postcards served this purpose. The images collected in this volume make it painfully clear that anti-Semitic propaganda did not simply begin with the Nazis. Nor was it the sole province of politicians, journalists, and rabble-rousers. One of the most virulent forms of anti-Semitism during this time was spread by quite ordinary people through postcards. Of the millions of postcards exchanged during their heyday of 1890 through 1920, a considerable percentage carried the anti-Semitic images that publishers churned out to meet public demand, reflecting deep-seated attitudes of society. Over 250 examples of such postcards, largely from the pre-Holocaust era, are reproduced here for the first time—selected, translated, and historically contextualized by one of the world’s foremost postcard collectors. Although representing but a small sample of the many thousands that were in print, these examples nonetheless offer a disturbing glimpse—one shocking to the modern sensibility—into the many permutations of anti-Semitism eagerly circulated by millions of people. In so doing, they help us to better understand a phenomenon still pervasive today." —Publisher
ContentsForeword / Michael Berenbaum
Acknowledgments
Introduction Appendix: Sayings by Famous Men About the Jews
Notes
Bibliography
Index
Physical Description viii, 238 pages : colour illustrations ; 22 x 26 cm
Carrier Typevolume
LanguageEnglish
PublisherLincoln : University of Nebraska Press ; Philadelphia : The Jewish Publication Society
Notes
RecognitionPurchase made possible thanks to The Chaim Zbar Foundation
Location in CollectionNew Library Items
Permalinkhttps://collections.vhec.org/Detail/objects/9140