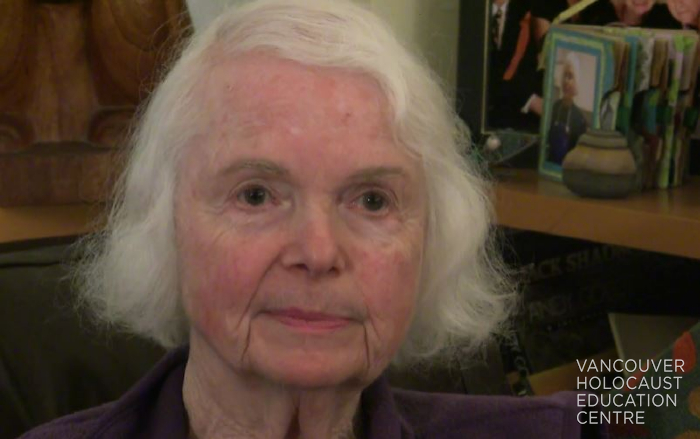 GenreTestimonies
Object IDAVT 284
Date of RecordingAugust 10, 2016
February 16, 2017
CreatorVancouver Holocaust Education Centre
InterviewerFreiman, Debby, Frederick, Toni-Lynn
IntervieweeKaplan, Nomi
Duration2h 27m 43.0s
LanguageEnglish
RightsVancouver Holocaust Centre Society for Education and Remembrance | Vancouver Holocaust Education Centre | Video Testimony | Consent & Release to Video Record and Retain on file
SynopsisNomi K. was born in Memel, Lithuania in 1933. She describes her family and their upper-middle class life. She recalls her father’s business and her parents’ large, vibrant social circle in the Jewish community. Nomi describes her early childhood. She discusses why her parents and extended family decided to leave Lithuania. She discusses her memories of this time and how she has learned more as an adult. She describes how her parents received Sugihara visas and her mother’s potential separation from the family because of difficulties with her passport. Their family then travelled on the Trans-Siberian Railway to Japan. Nomi describes the trip and her impressions of arriving in Japan. The family then left by ship to Vancouver. Next, they travelled by train to Ontario, where more of their relatives lived. Nomi describes reuniting with family and how her parents rebuilt their lives in Canada. She describes returning to Japan and visiting the Sugihara memorial. Nomi reflects on her identity as a refugee and survivor. She shows family photographs.
Auxiliary Documentation