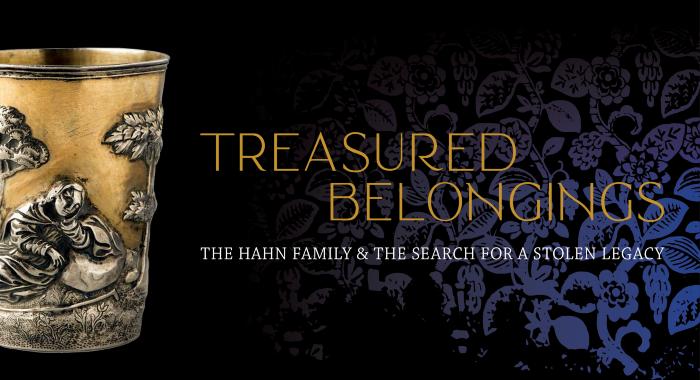 Treasured Belongings: The Hahn Family & the Search for a Stolen Legacy

Originating InstitutionVancouver Holocaust Education Centre
Exhibition Typein-house exhibition
CuratorSpaar, Ilona Shulman, Krieger, Nina
Event DateNovember 8, 2019–December 31, 2021
DescriptionBorn in Göttingen, Germany in 1880, Max Hahn was a successful businessman, civic leader and passionate collector. The Hahn family's Judaica collection was one of the most prominent private collections of its time, rivalling those of the Rothschild and Sassoon families.

After Max was arrested during the Kristallnacht pogrom of November 1938, the Nazis confiscated his silver Judaica and stripped the family of their property and possessions. With the support of his wife, Gertrud, Max engaged in a lengthy battle to save his Judaica. While their children, Rudolf (later Roger Hayden) and Hanni, were sent to England for safety in 1939, Max and Gertrud were deported to Riga in December 1941, where they ultimately perished. Most of the collection was never recovered.

Roger’s son, Dr. Michael Hayden, became immersed in his remarkable family history when he encountered photographs and documents left to him by his father. This original exhibition developed by the Vancouver Holocaust Education Centre brings together items from the Hahn archive alongside rich artefacts and interviews to detail the story of the Hahn family, their collection and their descendants’ restitution efforts. Involving extensive research and intensive negotiations with German museums and archives, the family’s ongoing search for their stolen collection speaks to timely themes of cultural loss, reconciliation and intergenerational legacy.